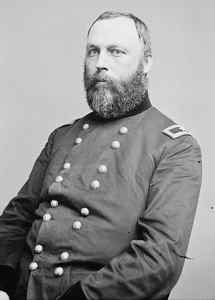 William Hammond (1828-1900), who served as surgeon general of the U.S. Army during the Civil War and later helped to found the American Neurological Association, coined the term "mysophobia" to describe an obsessive fear of contamination. In a psychiatric treatise, he described a "young lady, aged eighteen" who sought treatment from him for such a condition in 1879.

Little by little the idea became rooted that she could not escape sources of contamination, that other persons might defile her in some way or other, and that the various articles about her might also possess a like power.... When she went out into the street she carefully gathered her skirts together on passing any person, for fear that she might by mere contact be contaminated. She spent hours every day in minutely examining and cleansing her combs and brushes, and was even then not satisfied that they were thoroughly purified.

As to her hands, she washed them, as her mother informed me she had ascertained by actual count, over two hundred times a day. She could touch nothing without feeling irresistibly impelled to scrub them with soap and water....

In removing her clothes at night preparatory to going to bed, she carefully avoided touching them with her hands, because then she would not have sufficient opportunity for washing. She, therefore, had some one else to loosen the fastenings, and then she allowed her garments to drop on the floor, where she left them. Nothing would have persuaded her to touch any of her under-clothing after it had been worn till it had been washed. A great source of anxiety with her was the fact that her clothes were washed in the laundry with the clothing of other people; but she saw no practicable way of escape from this circumstance. It nevertheless made her very unhappy.

When not washing her hands or examining her combs and brushes, she spent nearly all the rest of the day in carefully inspecting every article of furniture and dusting it many times....

In conversing with this young lady, I had no difficulty in getting her to admit the absurdity of her ideas. She stated that whenever she reflected upon the subject she was convinced of their erroneous character, but that, nevertheless, she could not avoid acting as she did; for, as soon as she was exposed to any possible source of contamination, the ideas returned in full force. It was only when she had, as she thought, done her best to cleanse her hands that she doubted the correctness of her notions, which had so thoroughly become a part of her mentality.

These cases are sufficient to show the nature and characteristics of general mysophobia. Interesting cases of the affection have since been described by Seguin, Russell, and Shaw and I have heard of others of which I have not been able to obtain full particulars. [In a footnote, Hammond gives citations to "Mysophobia," etc., Alienist and Neurologist, October, 1880, p. 629; and "A Case of Mysophobia," Archivet of Medicine, October, 1881, p. 199.]

These simple salts, including potassium bromide, calcium bromide, and sodium bromide, were widely used at the turn of the twentieth century for sedation, having been introduced into medicine in 1853 as the very first drugs specific for that action. Dr. Hammond notes of bromides: 'There are few cases of morbid impulses and morbid fears, in the early part of their course, which resist their systematic and intelligent employment ... the patient once more sleeps well, and the mind gradually gets rid of its aberrations and resumes its normal condition.' [Hammond, 1883, p. 745] He also often prescribed ergot preparations, strong drugs obtained from a wheat fungus that have a long history in medicine and a multitude of actions. [From Osborn, 1998, p. 226]